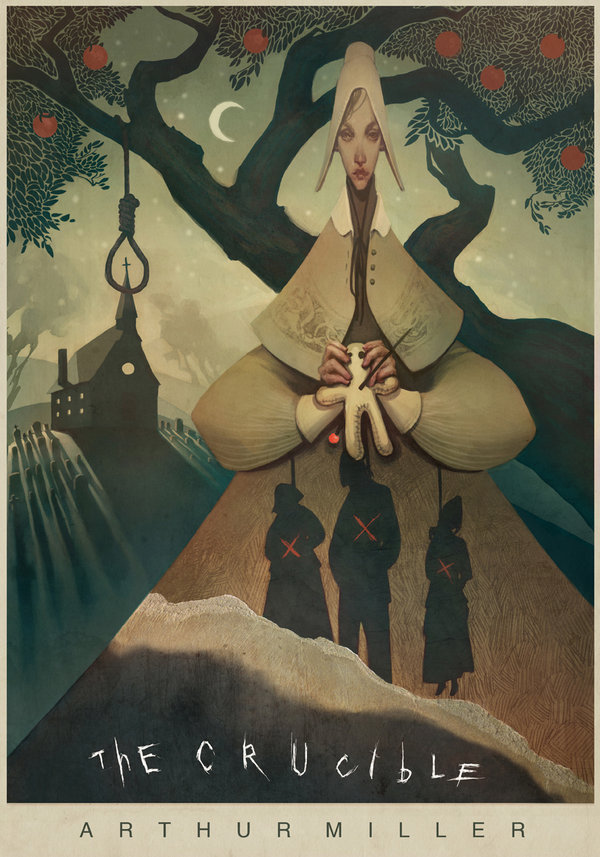 The following list of notable characters will be featured on the mid year exam; you will be expected to associate the characters with the significant comment that each made.  You should add to the description of each character as you read the play in order to benefit your opportunity for success on the exam.

Reverend Parris  Minister in Salem. He believes a faction plans to force him to leave Salem, so he attempts to strengthen his authority through the witch trial proceedings.

Betty Parris  Parris’ daughter. Her father discovers her dancing in the woods, and she later accuses individuals of practicing witchcraft.

Abigail Williams  Parris’ niece. She instigates the witch trials by falsely accusing others of witchcraft. She pretends to see spirits and instructs the other girls to pretend as well.

Tituba  Parris’ black slave. Parris discovers her casting spells and making potions with the girls in the woods.

Mrs. Ann Putnam  Wife of Thomas Putnam. She believes that a witch is responsible for the deaths of her seven infant children. Her jealousy of Rebecca Nurse leads her to accuse Goody Nurse of being a witch.

Thomas Putnam  A greedy landowner in Salem. He systematically accuses his neighbors of witchcraft so that he might purchase their lands after they hang.

Mary Warren  Servant to the Proctors. She goes along with Abigail and the girls by falsely accusing others of witchcraft; however, she later admits that she was lying.

Mercy Lewis  Servant to the Putnams and friend to Abigail. She participates in the witch trials by pretending to see spirits and falsely accusing individuals of witchcraft.

John Proctor  Salem farmer and former lover of Abigail’s. He openly denounces Parris and does not attend church.

Elizabeth Proctor  Wife of John Proctor. She is a decent and honest woman, who dismissed Abigail because of her affair with John Proctor.

Reverend Hale  Minister in Beverly. The people of Salem summon him to investigate Betty’s condition and determine if witchcraft is responsible. He supports the witch trials, but later denounces them when he learns that Abigail is lying.

Rebecca Nurse  Wife of Francis Nurse. She is one of the most respected individuals in Salem because of her kindness and charity. She argues against the witch trial investigations. Mrs. Putnam accuses her of witchcraft.

Francis Nurse  Farmer and landowner in Salem. He is a respected member of the community often called upon to settle disagreements between individuals.

Susanna Walcott  Friend to Abigail. She also takes part in the trials by falsely accusing others of witchcraft.

Giles Corey  Elderly inhabitant of Salem. He challenges the court in an attempt to defend his wife who has been convicted of witchcraft. He is pressed to death as a result.

Martha Corey   Wife of Giles Corey; Martha is the first woman of reputation to be accused by the girls.

Sarah Good  Beggar in Salem. She is the first individual accused of witchcraft.

Judge Hathorne  A judge in the Salem court.

Deputy Governor Danforth  A special judge serving in the Salem court during the witch trials. He signs the death sentences for those individuals who refuse to confess their crimes. He refuses to delay any execution for fear that he will appear weak and irresolute.

Ezekial Cheever  Appointed by the court to assist in arresting accused individuals.

Marshal Herrick  Appointed by the court to arrest the accused individuals.

ACT ONE:
1.  Why is Parris so agitated when the play opens
2.  Why is Parris’ daughter Betty pretending to be ill?
3.  Why were the girls dancing in the woods?
4.  Why was Tituba with the girls in the woods?
5.  What tragedies has Ruth Putnam experienced  Who does she blame these tragedies on?
6.  Why does Abigail Williams argue with Betty and then strikes Betty?
7.  What indiscretion does Abigail Williams share with John Proctor?
8.  Why does Abigail feel that Elizabeth Proctor is blackening her name?
9.  Why does Rebecca Nurse come to observe Betty?
10. What explanation does Rebecca Nurse offer for Betty’s condition?
11. Why does Parris want to send for the Reverend Hale?
12. What does Proctor think of Parris?
13. What do Giles Corey and Thomas Putnam quarrel about?
14. Why does Reverend Hale examine Betty?
15. What does Giles Corey ask Reverend Hale’s opinion about Corey’s wife?
16. Why does Abigail have to defend herself to Reverend Hale?
17.  Who does Abigail blame for her actions?
18. How does Act One conclude in calamity?
ACT II
1.  Why do Proctor and Elizabeth struggle to speak openly with each other when the act opens?
2.  Where has Marry Warren been?
3.  What did Mary Warren make for Elizabeth in court?
4.  What news does May Warren disclose that concerns Elizabeth and John Proctor?
5.  Why does Elizabeth want John to go to Salem?
6.  Why does Reverend Hale visit the Proctor home?
7.  Why is Proctor angry with Reverend Parris?
8.  What commandment is Proctor unable to recall?
9.  How has Abigail Williams claimed that Elizabeth Proctor has harmed her?
10.  What does Cheever discover in the Proctor home?
11. Why does Francis Nurse arrive at the Proctor home?
12. What is Giles Corey upset about?
13. What happens to Elizabeth Proctor at the end of Act Two?
ACT III
1.  Why does Giles Corey interrupt the trial?
2.  What has happened to Rebecca Nurse?
3.  Why has John Proctor arrived in court?
4. What startling development does Proctor learn about his wife?
5.  Who stands up for Proctor in court?
6.  What evidence does Francis Nurse present to the court; how does this evidence backfire?
7. Why does Mary Warren speak to the court; what information does she testify about?
8.  How does Mary’s confession upset the judges?
9.  What happens when Mary Warren is forced to confront the other girls in the courtroom?
10. What does Proctor confess?
11. Explain how everything turns against John Proctor at the conclusion of Act Three.
12.  Why is Reverend Hale so outraged at the conclusion of Act Three?
ACT IV
1.  Where does Act Four open?
2.  Why is Titutba calling Herrick Your Majesty and claiming that the devil has come to take her home?
3.  Who appears in the jail cell after Tituba is removed?
4.  What appears to upset Dansforth?
5.  Why are the cows wandering the highroads?
6.  According to Reverend Parris what has happened to Abigail Williams?
7.  What did Abigail do to Parris?
8.  According to Parris what has happened in Andover?
9.  What did Parris discover when he opened the door to his house?
10. What does Reverend Hale report to Dansforth?
11. What do the ministers want from Elizabeth Proctor?
12. List five events that the reader learns from Elizabeth and John Proctor’s conversation.
13. How does Giles Corey die?
14. After his conversation with Elizabeth, what does John Proctor decide to do?
15.  Why does Proctor change his mind?
16. What does Elizabeth Proctor mean when she expresses, He have his goodness now. God forbid I take it from him!?
17. List five facts that appear in the play’s summary Echoes down the Corridor.

The written response section requires you to consider the play according to rhetorical analysis.  Be familiar with Arthur Miller’s impetus for writing the play.  Finally, review the three conditions, discussed in class, that contribute to social dysfunctions such as the events portrayed in The crucible.