Each player gets three cards and privately determines the highest three-digit number they can make (you can use decimals or not, depending on age). Then, each player has a turn to stick with the cards they have, swap with one from the deck, or steal one of the other player’s. All players then lay down their best number to see who wins. See more at the link below.

Remove the jokers from your deck of playing cards. Each number card will represent its face value, aces count as one, and face cards as twelve.

Deal five cards to each player. Set the remainder of the deck face down in the middle of the table as a draw pile.

You will play four (or more) rounds:

In each round, players choose two cards from their hand to make a fraction that is as close as possible (but not equal) to the target number. Draw two cards to replenish your hand.

The player whose fraction is closest to the target collects all the cards played in that round. If there is a tie for closest fraction, the winners split the cards as evenly as they can, leaving any remaining cards on the table as a bonus for the winner of the next round.

After the last round, whoever has collected the most cards wins the game.

Posted in Game | Comments Off on Fraction Game: My Closest Neighbor

Students deal two cards, flips them to make a numerator and denominator, then determine whose fraction is the largest. The winner keeps all four cards, and play continues until the cards are gone.. Comparing fractions gets a little tricky, but if kids plot them on a fraction number line first, they’ll be practicing two skills at once.

Posted in Activity, Equivalent Fractions, Game | Comments Off on Declare a Fraction War

Eventually, kids will have to memorize multiplication facts, and this quick and easy domino game can help. Each player flips a domino and multiplies the two numbers. The one with the highest product gets both dominoes.

From: We are Teachers

Posted in Game, Multiplication | Comments Off on Multiplying Dominoes

Think Go Fish, but instead of matching pairs, the aim is to match two cards in which one can divide evenly into the other. For instance, 8 and 2 are a pair, since 8 ÷ 2 = 4.

Posted in Division | Comments Off on Divide and Conquer

How to Play Make a Buck

The object of this game is to be the first person to collect ten cards that exactly equal $1.00.

The player with the most points at the end of ten rounds wins!

Multiplication is a new skill for third grade math students, but it builds on concepts they’ve mastered in earlier grades. This card game helps them make the connections. Each player flips two cards, then draws a grid and makes dots where the lines join. They count the dots, and the person with the most keeps all the cards.

Learn more: Teach Beside Me

From: We are Teachers

Posted in Activity, Game, Multiplication | Comments Off on Count your Dots

This online board game has you thinking ahead where you may want to land (on a square number) while avoiding landing on a prime number.  Give it a try and play with someone or against yourself. 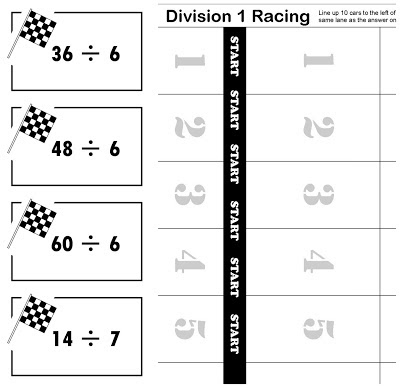 Use order of operations to get to 24.

Math card games aren’t just for little kids; even adults will find this one a bit tricky. Each player is dealt four cards, then uses the order-of-operations rules to try to make a number as close to 24 as possible. Simple but challenging!

Posted in Uncategorized | Comments Off on 24