The Legend of Thaddeus and Gertrude

Elmer, Wilbur, and Whitney each grabbed a shovel from the shed and headed over to the old town cemetery to _1_ the remains of Gertrude T. Buxley.  The men found the marker located along with several older graves in the meadow overlooking the lake.  Gertrude was once married to Thaddeus Stacey Buxley a _2_ of the early settlement and reportedly one of the wisest men in Laketown’s history.   The village legend expressed that Gertrude had expired because she was _3_ed, having starved herself to death due depression from the loss of her seven children in a barn fire on New Year’s day in 1794.  The accident was so horrendous, according to town legend in part due to the _4_ of the children’s bodies that filled the evening air with a sinister stench that reportedly reemerged every New year’s eve following the family tragedy.  But Elmer, who had been studying an old _5_ in his family’s library concluded that Gertrude’s passing was not accurately reported.  From studying the lyrics to the musical arrangement Elmer surmised that Gertrude had been shot in the head by Thaddeus, the evidence was _6_ to Elmer, so evident in fact, that he called his brothers to help him _1_ the grave.

It seems that Gertrude was a _7_ lady who was so fond of chatting that she drove herself to a state of _8_, so excited to converse was she that she apparently drove her husband crazy, at least according to the lyrics of the song that Elmer had discovered composed by Thaddeus himself, shortly after Gertrude’s reported death.

The grave-site was in a _9_ location in the shade of an old elm which kept the heat of the summer sun from torturing the men as they went about their work.  Finally the casket was unearthed, Wilbur was relieved when the casket was opened to see that Gertrude’s skull was _10_, hidden by a black veil placed over her head for three hundred years.  Whitney removed the veil.  Each man was astonished to see a large hole in her forehead caused by a musket ball.  Gertrude, as Wilbur believed had been shot!

Suddenly the skeleton leaped up from her coffin and danced exuberantly around the grave-site while singing this song:

“I talked a many turn
That part is surely true
but old Thaddeus had no right
to make my life so blue.”

Suddenly without any indication the bright afternoon sky expelled a ferocious bolt of lightning that struck the dancing bones which vanished in a silvery dust.  The three brothers stood in silent amazement as they watched the translucent figure of a woman gradually joined one-by-one with several children as they rose in a dancing circle until they vanished in the deep blue sky. 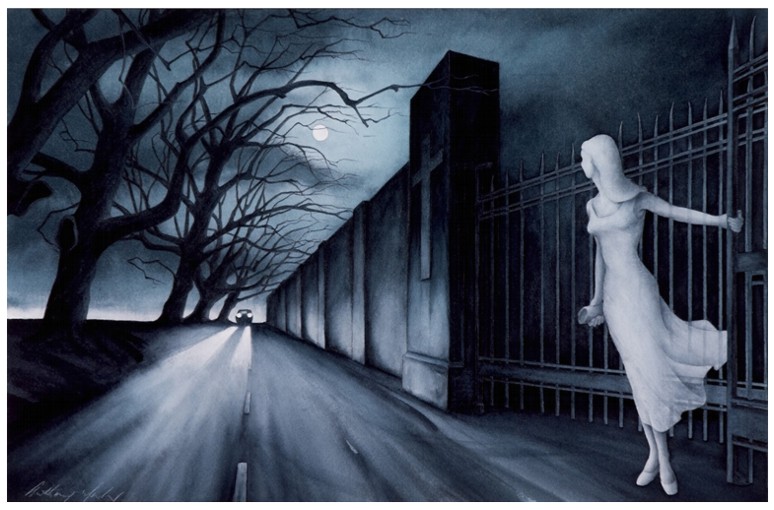