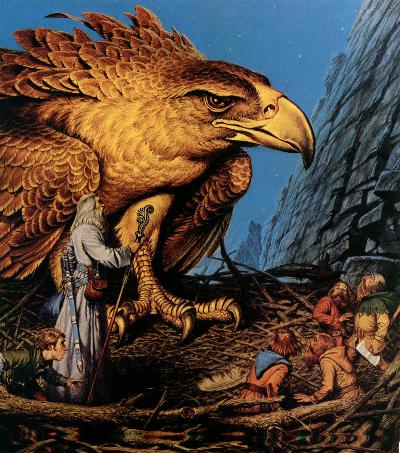 The Hobbit, or There and Back Again, better known by its abbreviated title The Hobbit, is a fantasy novel and children’s book by J. R. R. Tolkien. It was published on 21 September 1937 to wide critical acclaim, being nominated for the Carnegie Medal and awarded a prize from the New York Herald Tribune for best juvenile fiction. The book remains popular and is recognized as a classic in children’s literature.
Set in a time “Between the Dawn of Færie and the Dominion of Men”, The Hobbit follows the quest of home-loving hobbit Bilbo Baggins to win a share of the treasure guarded by the dragon, Smaug. Bilbo’s journey takes him from light-hearted, rural surroundings into darker, deeper territory. The story is told in the form of an episodic quest, and most chapters introduce a specific creature, or type of creature, of Tolkien’s Wilderland. By accepting the disreputable, romantic, fey and adventurous side of his nature (the “Tookish” side) and applying his wits and common sense, Bilbo develops a new level of maturity, competence and wisdom.  The story reaches its climax in the Battle of Five Armies, where many of the characters and creatures from earlier chapters re-emerge to engage in conflict.
Themes of personal growth and forms of heroism figure in the story. Along with conflict, these themes lead critics to cite Tolkien’s own experiences, and those of other writers who fought in World War I, as instrumental in shaping the story. The author’s scholarly knowledge of Anglo-Saxon literature and interest in fairy tales are also often noted as influences. 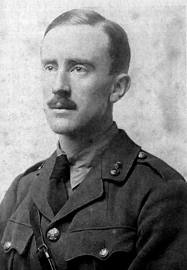 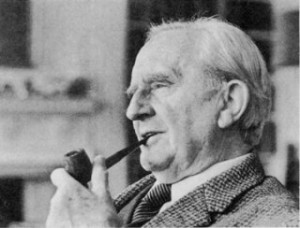 John Ronald Reuel Tolkien, (3 January 1892 – 2 September 1973) was an English writer, poet, philologist, and university professor, best known as the author of the classic high fantasy works The Hobbit, The Lord of the Rings, and The Silmarillion.
Tolkien was Rawlinson and Bosworth Professor of Anglo-Saxon at Oxford University from 1925 to 1945 and Merton Professor of English Language and Literature there from 1945 to 1959. He was a close friend of C. S. Lewis—they were both members of the informal literary discussion group known as the Inklings. Tolkien was appointed a Commander of the Order of the British Empire by Queen Elizabeth II on 28 March 1972.
After his death, Tolkien’s son Christopher published a series of works based on his father’s extensive notes and unpublished manuscripts, including The Silmarillion. These, together with The Hobbit and The Lord of the Rings form a connected body of tales, poems, fictional histories, invented languages, and literary essays about a fantasy world called Arda, and Middle-earth within it. Between 1951 and 1955, Tolkien applied the term legendarium to the larger part of these writings.
While many other authors had published works of fantasy before Tolkien, the great success of The Hobbit and The Lord of the Rings led directly to a popular resurgence of the genre. This has caused Tolkien to be popularly identified as the “father” of modern fantasy literature—or, more precisely, of high fantasy.  In 2008, The Times ranked him sixth on a list of “The 50 greatest British writers since 1945”. Forbes ranked him the 5th top-earning dead celebrity in 2009.