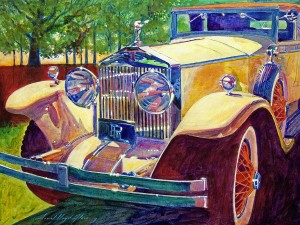 Nick realizes that Gatsby’s lavish parties have suddenly ceased. In addition, he discovers Gatsby has fired all his servants, and hired new ones who wouldn’t gossip about he and Daisy, who comes over frequently. Shortly after this discovery, Gatsby calls Nick, inviting him to Daisy’s for lunch the following day. Daisy, too, calls half an hour later, which inspires Nick to believe “something was up” (120).

The next day Gatsby and Nick arrive at the Buchanans’ house, joining Jordan Baker. In the course of the visit, Tom Buchanan finally realizes that Daisy loves Gatsby, and his usually poor temper begins to get the best of him. Tom decides they are all going to New York City, then declares he will drive Gatsby’s yellow car. When Tom orders Daisy to come with him she refuses, going alone with Gatsby in Tom’s blue coupe. Tom, Jordan, and Nick stop for gas along the way at George Wilson’s auto garage, where they find a physically sick Wilson. George — having realized his wife has been unfaithful, just not with whom — informs the trio that Myrtle and he are moving west immediately. Nick quickly points out the irony of Tom — who has been cheating with Myrtle Wilson — making the similar discovery less than an hour before. As they leave Wilson’s garage, Nick notices Myrtle watching them with “jealous terror” (131) from a window, as she mistakenly presumes Jordan Baker to be Tom’s wife.

The passengers of the two cars reconvene, and attempt to escape the stifling heat in a room inside New York City’s Plaza Hotel. Tom, pride wounded by his wife’s affair, makes several unsuccessful attempts to insult Gatsby, then finally comes right out and demands, “What kind of a row are you trying to cause in my house anyhow?” (136). Gatsby responds by saying Daisy doesn’t love Tom, and that she only married him because Gatsby was too poor. As the two men proceed to argue, Tom loses his temper and insists Daisy once loved him and still does. An ugly spectacle unfolds — with Gatsby on one side trying to get Daisy to say she never loved Tom and that she’s leaving him, and Tom on the other side declaring Daisy’s not leaving — leaving Daisy in the middle, acting helpless and wanting to escape the situation. Tom reveals yet another piece of Gatsby’s past as he angrily calls him a “common swindler,” (140) accusing him of selling bootleg alcohol. Finally, Tom tells Daisy and Gatsby to drive back in Gatsby’s car, taunting him that he must realize “his presumptuous little flirtation is over” (142).

That same night, at the ash-heap halfway between New York City and East Egg, George Wilson has Myrtle locked up in their room, where he plans to keep her until they move west. Myrtle escapes, however, but when she rushes out into the night she gets hit by a “big yellow car” (147) that doesn’t stop. On their drive home, Tom, Jordan, and Nick — who had been behind Gatsby and Daisy — come upon the crowd gathered outside Wilson’s garage. When Tom discovers his mistress has been “instantly killed” (147) he quickly makes the connection that Gatsby’s yellow car has killed her.

At the Buchanans’, Nick finds Gatsby hiding in the bushes. Gatsby tells Nick that Daisy had been driving his car, that she has locked herself in her room, and that he intends to watch the Buchanan house to ensure Tom doesn’t physically harm her. Nick goes to the house to look for any sign of commotion, only to find Tom and Daisy talking intimately at the kitchen table, holding hands. Nick goes home alone, leaving Gatsby to his vigil over the house as he watches “over nothing” (153).