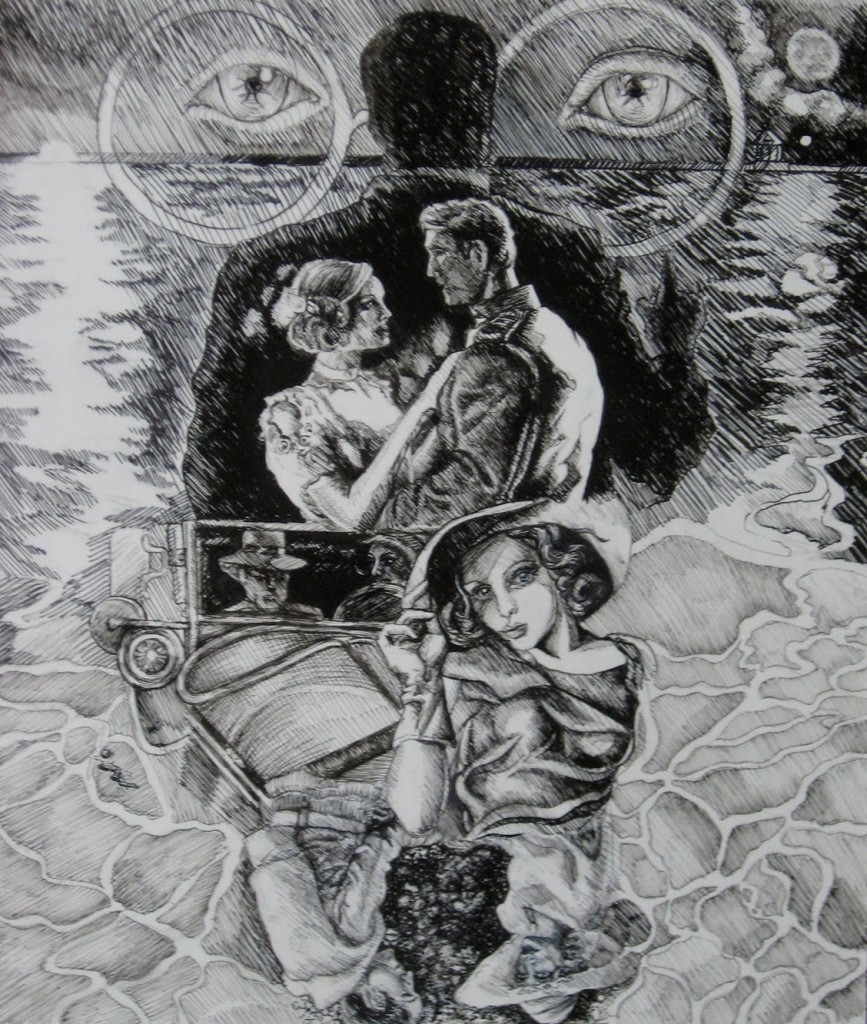 At the outset of Chapter 4, Gatsby arrives at Nick’s house, informing him they are going to lunch in New York City. On this occasion Gatsby provides Nick with his long-awaited biography, swearing that he is the son of wealthy parents in the middle-west and that he attended Oxford. Nick, suspicious of the way Gatsby says this, wonders “if there wasn’t something a little sinister about him after all” (69). Gatsby continues, however, detailing how, after being promoted to major in World War I, every Allied government honored him for his achievements. Gatsby’s presentation of a war medal and picture from his Oxford days suddenly seems to convince Nick of his companion’s stories.

At lunch, Gatsby introduces Nick to Mr. Meyer Wolfshiem. After retelling a story about the brutal murder of one of his associates, Wolfshiem mistakenly asks Gatsby if Nick is present to negotiate some unnamed business. Gatsby quickly corrects him, replying mysteriously, “Oh no…this isn’t the man” (75). At the end of lunch, Nick sees Tom Buchanan and introduces Gatsby, who acts embarrassed and quickly disappears unnoticeable when Nick turns his head.

The rest of Chapter 4 is devoted to explaining Gatsby’s hasty exit, as Jordan Baker repeats the story Gatsby told her to Nick. Five years earlier Jordan and Daisy Buchanan were acquaintances in Louisville, back when Daisy was very popular with the young officers in town. One day, Jordan saw her in a car with an unknown lieutenant, who looked as Daisy “in a way that every young girl wants to be looked at sometime” (80). This young lieutenant’s name, Jordan reveals, was Jay Gatsby. By the next year, however, Daisy was engaged to Tom Buchanan. On the night of the bridal dinner, Jordan — a bridesmaid at the wedding — found Daisy drunk and crying, while clutching a mysterious letter and declaring she had changed her mind. In spite of this outburst, she married Tom Buchanan “without so much as a shiver and started off on a three months’ trip to the South Seas” (81).

Jordan continues, saying that the Buchanans’ party — when Jordan had inquired whether Nick knew the Gatsby living in West Egg — was the first time Daisy had heard Gatsby’s name in four years. Later, Jordan insists that Gatsby bought his West Egg mansion for the sole purpose of being across the bay from Daisy’s house — with the green light at the end of the dock — in East Egg. Using Jordan as his messenger, Gatsby requests that Nick invite Daisy to his house, then allow Gatsby to stop by and see her. The chapter closes with Nick kissing Jordan Baker, momentarily forgetting about the saga of Daisy and Gatsby.