The Death of a Moth by Annie Dillard 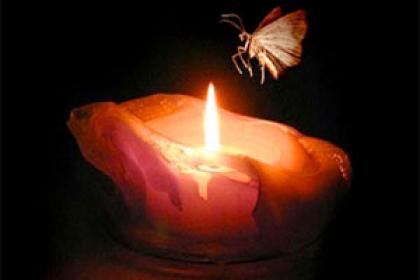 Annie Dillard was born in Pittsburgh in 1945. She attended private school there and, later, Hollins College in Roanoke, Virginia, from which she received a master’s degree in English literature in 1968. She lived in the Roanoke Valley from 1965 to 1975, when she moved to Puget Sound. In 1979, she returned to the East Coast. Dillard has written a book of poems, Tickets for a Prayer Wheel (1974); a prose narrative, Pilgrim at Tinker Creek (1974), which won a Pulitzer Prize; a short prose narrative, Holy the Firm (1977), from which “Transfiguration” (editor’s title) is taken; a book of literary theory, Living by Fiction (1982); and Encounters with Chinese Writers (1984). “Transfiguration” originally appeared under the title “The Death of a Moth.” Other works by Annie Dillard include a memoir, An American Childhood (1987); The Living (1992); her first novel; and Mornings Like This: Found Poems (1995).

I live on northern Puget Sound, in Washington State, alone. I have a gold cat, who sleeps on my legs, named Small. In the morning I joke to her blank face, Do you remember last night? Do you remember? I throw her out before breakfast, so I can eat.

There is a spider, too, in the bathroom, with whom I keep a sort of company. Her little outfit always reminds me of a certain moth I helped to kill. The spider herself is of uncertain lineage, bulbous at the abdomen and drab. Her six-inch mess of web-works works somehow, works miraculously, to keep her alive and me amazed.

The web itself is in a corner behind the toilet, connecting tile wall to
tile wall and floor, in a place where there is, I would have thought,
scant traffic. Yet under the web are sixteen or so corpses she has
tossed to the floor.

The corpses appear to be mostly sow bugs, those little armadillo creatures who live to travel flat out in houses and die round. There is also a new shred of earwig, three old spider skins crinkled and clenched, and two moth bodies, wingless and huge and empty, moth bodies I drop to my knees to see.
Today the earwig shines darkly and gleams, what there is of him: a dorsal curve of thorax and abdomen, and a smooth pair of cerci[1] by which I knew his name. Next week, if the other bodies are any indication, he will be shrunken and gray, webbed to the floor with dust. The sow bugs beside him are hollow and empty of color, fragile, a breath away from brittle fluff. The spider skins lie on their sides, translucent and ragged, their legs drying in knots. And the moths, the empty moths, stagger against each other, headless, in a  confusion of arching strips of chitin like peeling varnish, like a jumble of buttresses for cathedral domes, like nothing resembling moths, so that I should hesitate to call them moths, except that I have had some experience with the figure Moth reduce to a nub.

Two summers ago I was camping alone in the Blue Ridge Mountains in Virginia.  I had hauled myself and gear up there to read, among other things, James Ramsey Ullman’s The Day on Fire, a novel about Rimbaud that had made me want to be a writer when I was sixteen;[2] I was hoping it would do it again. So I read, lost, every day sitting under a tree by my tent, while warblers swung in the leaves overhead and bristle worms trailed their inches over the twiggy dirt at my feet; and I read every night by candlelight, while barred owls called in the forest and pale moths massed round my head in the clearing, where my light made a ring.

Moths kept flying into the candle. They would hiss and recoil, lost upside down in the shadows among my cooking pans. Or they would singe their wings and fall, and their hot wings, as if melted, would stick to the first thing they touched—a pan, a lid, a spoon—so that the snagged moths could flutter only in tiny arcs, unable to struggle free. These I could release by a quick flip with a stick; in the morning I would find my cooking stuff gilded with torn flecks of moth wings, triangles of shiny dust here and there on the aluminum. So I read, and boiled water, and replenished candles, and read on.

One night a moth flew into the candle, was caught, burnt dry, and held. I must have been staring at the candle, or maybe I looked up when a shadow crossed my page; at any rate, I saw it all. A golden female moth, a biggish one with a two-inch wingspan, flapped into the fire, dropped her abdomen into the wet wax, stuck, flamed, frazzled and fried in a second. Her moving wings ignited like tissue paper, enlarging the circle of light in the clearing and creating out of the darkness the sudden blue sleeves of my sweater, the green leaves of jewelweed by my side, the ragged red trunk of a pine. At once the light contracted again and the moth’s wings vanished in a fine, foul smoke. At the same time her six legs crawled, curled, blackened, and ceased, disappearing utterly. And her head jerked in spasms, making a spattering noise; her antennae crisped and burned away and her heaving mouth parts crackled like pistol fire. When it was all over, her head was, so far as I could remember, gone, gone the long way of her wings and legs. Had she been new, or old? Had she mated and laid her eggs, had she done her work? All that was left was the glowing horn shell of her abdomen and thorax—a fraying partially collapsed gold tube jammed upright in the candle’s round pool.

And then this moth-essence, this spectacular skeleton, began to act as a wick. She kept burning. The wax rose in the moth’s body from her soaking abdomen to her thorax to the jagged hole where her head should be, and widened into a flame, a saffron-yellow flame that robed her to the ground like any immolating monk. That candle had two wicks, two flames of identical height, side by side. The moth’s head was on fire. She burned for two hours, or until I blew her out. 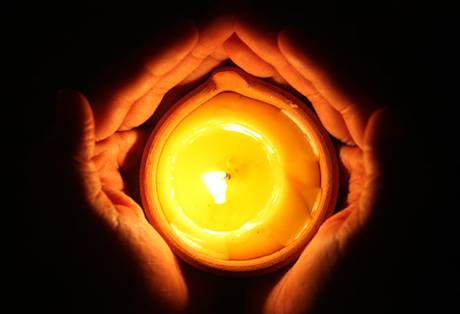 She burned for two hours without changing, without bending or leaning—only glowing within, like a building glimpsed through silhouetted walls, like a hollow saint, like a flame-faced virgin gone to God, while I read by her light, kindled, while Rimbaud in Paris burnt out his brains in a thousand poems, while night pooled wetly at my feet.

And that is why I believe those hollow crisps on the bathroom floor are moths. I think I know moths, and fragments of moths, and chips and tatters of utterly empty moths, in any state. How many of you, I asked the people in my class, which of you want to give your lives and be writers? I was trembling from coffee, or cigarettes, or the closeness of faces all around me. (Is this what we live for, I thought; is this the only final beauty: the color of any skin in any light, and living, human eyes?)  All hands rose to the question. (You, Nick?  Will you? Margaret? Randy? Why do I want them to mean it?) And then I tried to tell them what the choice must mean: you can’t be anything else. You must go at your life with a broadax . . . They had no idea what I was saying. (I have two hands, don’t I? And all this energy, for as long as I can remember. I can do it in the evenings, after skiing, or on the way home from the bank, or after the children are asleep . . . ) They thought I was raving again. It’s just as well.

I have three candles here on my table which I disentangle from the plants and light when visitors come. Small usually avoids them, although once she came too close and her tail caught on fire; I rubbed it out before she noticed. The flames move the light over everyone’s skin, draw light to the surface of the faces of my friends. When the people leave I never blow the candles out, and after I’m asleep, they flame and burn.

[1] Plural of cercus, posterior “feeler” of an insect.
[2] French poet Arthur Rimbaud (1854-1891) himself began writing at age sixteen and produced his major work before he was twenty. Ullman’s novel was published in 1958.