The Semicolon:  There are those who have a prejudice against the semicolon; personally I find it a very useful stop.  (G. V. Carey, Mind the Stop, 1958)   Stronger than a comma, less forceful than a period (or full stop): put simply, that’s the nature of the semicolon. It’s a mark, Lewis Thomas has said, that offers “a pleasant little feeling of expectancy; there is more to come.”  But be advised: not all writers and editors are fans of the semicolon, and its use has been on the decline for well over a century.

Rules for using the Semicolon:

1.  Use a semicolon between closely related main clauses not joined by a coordinating conjunction (and, but, for, nor, or, so, yet).
In most cases, we mark the end of a main clause (or sentence) with a period. However, a semicolon may be used instead of a period to separate two main clauses that are closely connected in meaning or that express a clear contrast.

“I never vote for anyone; I always vote against.”
(W. C. Fields)

“Life is a foreign language; all men mispronounce it.”
(Christopher Morley)

“I believe in getting into hot water; it keeps you clean.”
(G. K. Chesterton)

2.  Use a semicolon between main clauses linked by a conjunctive adverb (such as however and therefore) or transitional expression (such as in fact or for example).
Examples:

“Words rarely express the true meaning; in fact they tend to hide it.”
(Hermann Hesse)

“It is forbidden to kill; therefore, all murderers are punished unless they kill in large numbers and to the sound of trumpets.”
(Voltaire)

3.  Use a semicolon between items in a series when the items themselves contain commas or other marks of punctuation.
Ordinarily items in a series are separated by commas, but replacing them with semicolons can minimize confusion if commas are needed in one or more of the items. This use of the semicolon is especially common in business and technical writing.

The sites being considered for the new Volkswagen plant are Waterloo, Iowa; Savannah, Georgia; Freestone, Virginia; and Rockville, Oregon. 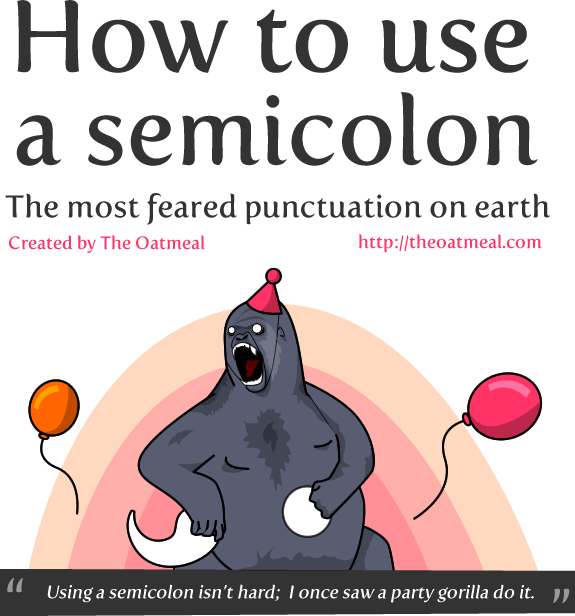