satire– a literary term used to ridicule or make fun of human vice or weakness, often with the intent of correcting, or changing, the subject of the satiric attack.

rhetoric-  the art of speaking or writing effectively: as
the study of principles and rules of composition, of writing or speaking as a means of communication or persuasion: skill in the effective use of speech; also : insincere or grandiloquent language.  Example: The mayor’s promise to fight drugs was just rhetoric, since there was no money in the city budget for a drug program.

According to Aristotle: “Rhetoric is the faculty of discovering in any particular case all of the available means of persuasion. ”

The first part of Aristotle’s triumvirate of persuasion is Ethos, which is the Greek word that means “customs” or “habit” and has the connotation of referring to a person’s moral code and their character.

Logic may sometimes feel cold, but it also proves to be very reassuring and persuasive when you’re in need of information you can trust.

Logos is the appeal to the audience’s sense of logic and relies on reasoning to persuade people. Aristotle was especially intrigued by Logos because of how well logic can be used to arrive at claims that are counter-intuitive or even antithetical to the original purpose.

Logos is the Greek word for “word” and is largely concerned with the internal consistency of a claim based on a few core features:

The Greek word for “suffering” or “experience” is Pathos, the term Aristotle used for a reliance on emotions to make a persuasive point.

Pathos is largely considered to be an emotional appeal on any level, but Aristotle chose his word carefully because truly successful Pathos persuasion targets an audience’s sympathy and empathy. The speaker or author wants the audience to move past understanding and reach a point where they identify with the argument from his point of view.

Think of Pathos as getting an audience to feel your pain. It is often used as a way to combine the seemingly separate parts of Ethos and Logos. 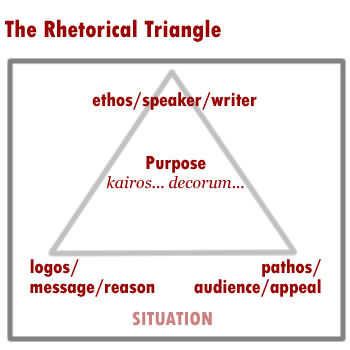 hyperbole– a type of figurative language. It is often confused with a simile or a metaphor because it often compares two objects. The difference is a hyperbole is an exaggeration. For example: His feet were as big as a barge.

analogy– likeness or similarity between two things that are otherwise unalike. Analogy enhances an understanding of complex concepts or abstractions by allowing learners to consider the concepts in a different context.

metaphor– a comparison between two things that are otherwise dissimilar without using like or as.

foreshadow– a hint or indication given to the reader as to an event or development to follow.