Hyphen:  is a punctuation mark ( – ) used between the parts of a compound word or name or between the syllables of a word, especially when divided at the end of a line of text.

Some words that become unmanageably long with the addition of a prefix. Thus under-secretary and inter-governmental. Antidisestablishmentarianism would, however, lose its point if it were hyphenated.

A sum followed by the word worth also needs a hyphen. Thus $25m-worth of goods.

Adverbs do not need to be linked to participles or adjectives by hyphens in simple constructions: The regiment was ill equipped for its task; The principle is well established; Though expensively educated, the journalist knew no grammar. But if the adverb is one of two words together being used adjectivally, a hyphen may be needed: The ill-equipped regiment was soon repulsed; All well-established principles should be periodically challenged. The hyphen is especially likely to be needed if the adverb is short and common, such as ill, little, much and well. Less-common adverbs, including all those that end -ly, are less likely to need hyphens: Never employ an expensively educated journalist.

Do not overdo the literary device of hyphenating words that are not usually linked: the stringing-together-of-lots-and-lots-of-words-and-ideas tendency can be tiresome.

9. THE QUARTERS OF THE COMPASS:

Words gathered together in quotation marks to serve as adjectives do not usually need hyphens as well: the “Live Free or Die” state. 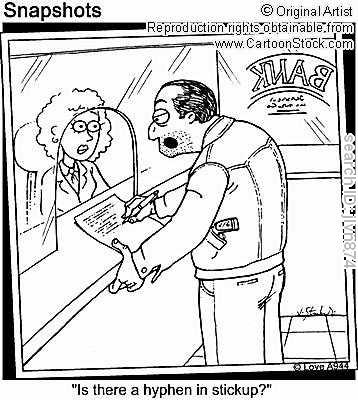