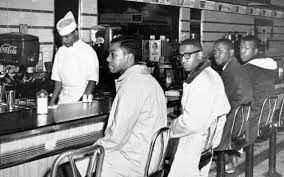 The Greensboro sit-in was a civil rights protest that started in 1960, when young African American students staged a sit-in at a segregated Woolworth’s lunch counter in Greensboro, North Carolina, and refused to leave after being denied service. The sit-in movement soon spread to college towns throughout the South. Though many of the protesters were arrested for trespassing, disorderly conduct or disturbing the peace, their actions made an immediate and lasting impact, forcing Woolworth’s and other establishments to change their segregationist policies.