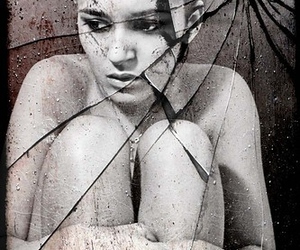 When Elizabeth was twelve years old, nothing mattered more to her than the cleanly cut mountain range of her ribs and the elation harvested from a day without food. She dream-walked to school to maintain her straight A’s, then stumbled home to look at pictures of skeletons and wish she could be one. She ate one grain of rice at a time and counted every single calorie until she never surpassed five hundred tiny monsters a day. Elizabeth’s greatest achievement was not the constant stream of one hundreds circled in red pen at the top of her assignments or mastering shifting on her violin, but the fact that she could fit her hands around her thigh. The sad truth is, she was too weak to dance a single step. And still, nobody noticed.

Elizabeth finally broke one day in May and stuffed an entire cake into her mouth in one half hour. She sobbed in the bathroom trying to work up the courage to purge her stomach of the abomination she had subjected herself to, only to discover that she did not have a strong enough gag reflex or willing enough fingers. She finally gave up, laid her head on the cold tiles, and let herself sleep. That’s where her mother found her later that night, bearing a cup of hot tea and a smile that turned to horror when the medicinal smell of attempted vomit hit her like a brick.

They drove the next day, May 22nd, 2012, to the doctor’s office for a routine check-up that both of them knew was not a check-up. As Elizabeth changed into the thin gown the nurse had left, her mother noticed the ridges of her back mapped out like the underside of a horseshoe crab. The harsh fluorescent lighting made Elizabeth seem transparent. Almost as transparent was the doctor’s facial expression after she checked her heart rate and looked her dead in the eye. “You are going to die if you don’t stop this madness,” the doctor said. The scariest part is that Elizabeth did not care.

Her mother bundled her into the car and sped to the nearest emergency room to save her fading daughter whose body had started eating itself. Elizabeth was shackled to an armchair in the common room of an eating disorder unit for the next few months, being force-fed blocks of scrambled ‘eggs’ and the ideas that she was good enough, that she was worth a life. She didn’t believe it for the longest time, but finally some light seeped into her veins and started to chase the pain away. Elizabeth began to see beauty again, the beauty of the trees outside Mercy Hospital with their leaves whispering in the late morning breeze and in the haggard face of the woman across the room who always smiled at her when she needed it most.Elizabeth

When Elizabeth was ten years old, nothing could stop her feet from moving. She skipped down the halls at school to meet her gaggle of friends at the water fountain and giggle about the cute boys in the upper grades. She ran and leaped through her house and made the floorboards squeak with her unbridled, childish enthusiasm. Dancing was her greatest joy- the click of hard heels and toes on the floor, the feel of a perfectly timed treble, the praise of a favorite teacher- and she couldn’t contain her love for it. When she danced, she was also free to love herself. Elizabeth’s life was an untainted melody, the way a child’s life should be.

One day in fourth grade, the music came to an abrupt halt. People say that magazines and models set off episodes like this, but the misery simply crept up unnoticed until Elizabeth couldn’t remember what it was like to go to the dance studio and not study herself in the mirrors, analyzing every single flaw. A B-plus on a paper became an excuse to throw away her sandwich at lunch or give all her Oreos to an unsuspecting friend. The reflections in mirrors sent Elizabeth into a downward spiral of loathing that streaked her cheeks with the mascara she bought in an attempt to feel beautiful. Nobody noticed her crying in the bathroom during lunch.

Things got better for a while when she surrounded herself with support from friends, family, and a salubrious nutritionist that was obsessed with the benefits of Omega-3 fats. Food passed her lips without resistance, but there was a darkness that lurked just below the ivory surface of Elizabeth’s skin, biding its time to claw its way out of her veins and consume her.

Slowly, the darkness surfaced. Elizabeth closed off her heart and tried to block it out, but the physical and mental exertion took its toll and her eyes sunk into her head as if they wanted to disappear. Sometimes she wished that they would disappear, so she wouldn’t have to look at herself anymore. Then, Elizabeth’s parents made a huge mistake. On her twelfth birthday, she woke up to a huge pile of meticulously wrapped gifts at the foot of her bed. One in particular- a thin, oblong package with a gigantic bow- caught her attention immediately. She felt a kind of sinister pull towards it, and she found her bony arms stretching out towards it of their own volition, itching to tear off the paper. As the wrappings flaked off she caught a glimpse of reflective metal framing her dilated pupils. The savagery in her own eyes frightened her.

That mirror became a personification of Elizabeth’s self-hatred, her longing for weightlessness, and her fragmented, fragile logic. She set it outside of the shower so she could be reminded of the utter disgustingness of her body every single night and track the recession of her waistline. In one month, she dropped from eighty to seventy pounds but still grabbed at the loose skin around her stomach and inner thighs and screamed, FAT!!!!!! into her pillow at night. Five more pounds, she thought, not realizing that her heart was about to simply give up like she had given up on herself.

Now, Elizabeth has regained her love for life. She is beautiful. She has no shame. She gossips with friends and dances and loves herself. She only looks in the mirror to correct her ballet technique during dance class. Even though she has gone through more misery in her adolescence than many people will go through in their entire lives, Elizabeth knows that the world is a wonderful place. Elizabeth is finally okay, and she plans to stay that way forever.