The apostrophe has three uses:

To see if you need to make a possessive, turn the phrase around and make it an “of the…” phrase.

For example:
the boy’s hat = the hat of the boy
three days’ journey = journey of three days

If the noun after “of” is a building, an object, or a piece of furniture, then no apostrophe is needed!

Once you’ve determined whether you need to make a possessive, follow these rules to create one.

add ‘s to the singular form of the word (even if it ends in -s):

For plural, proper nouns that are possessive, use an apostrophe after the ‘s’: “The Eggles’ presentation was good.” The Eggles are a husband and wife consultant team.)

add ‘s to the plural forms that do not end in -s:
the children’s game
the geese’s honking

add ‘ to the end of plural nouns that end in -s:
two cats’ toys
three friends’ letters
the countries’ laws

add ‘s to the end of compound words:
my brother-in-law’s money

add ‘s to the last noun to show joint possession of an object:
Todd and Anne’s apartment

Apostrophes are used in contractions. A contraction is a word (or set of numbers) in which one or more letters (or numbers) have been omitted. The apostrophe shows this omission. Contractions are common in speaking and in informal writing. To use an apostrophe to create a contraction, place an apostrophe where the omitted letter(s) would go.

Here are some examples:

Apostrophes are used to form plurals of letters that appear in lowercase; here the rule appears to be more typographical than grammatical, e.g. “three ps” versus “three p’s.” To form the plural of a lowercase letter, place ‘s after the letter. There is no need for apostrophes indicating a plural on capitalized letters, numbers, and symbols (though keep in mind that some editors, teachers, and professors still prefer them). Here are some examples:

p’s and q’s = a phrase believed to be taken from the early days of the printing press when letters were set in presses backwards so they would appear on the printed page correctly. Although the origins of this phrase are disputed, the expression was used commonly to mean, “Be careful, don’t make a mistake.” Today, the term also indicates maintaining politeness, possibly from “mind your pleases and thank-yous.”

There are two G4s currently used in the writing classroom.
many &s = many ampersands

Don’t use apostrophes for personal pronouns, the relative pronoun who, or for noun plurals.

Here are some examples:

(Note: Its and it’s are not the same thing. It’s is a contraction for “it is” and its is a possessive pronoun meaning “belonging to it.” It’s raining out= it is raining out. A simple way to remember this rule is the fact that you don’t use an apostrophe for the possessive his or hers, so don’t do it with its!) 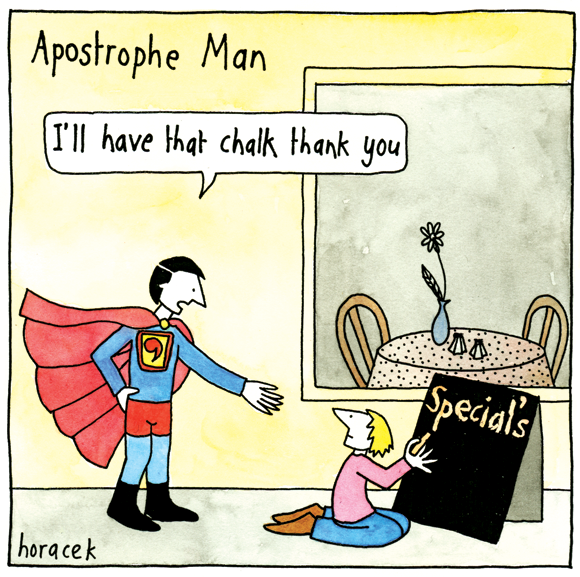