A Week in the Woods 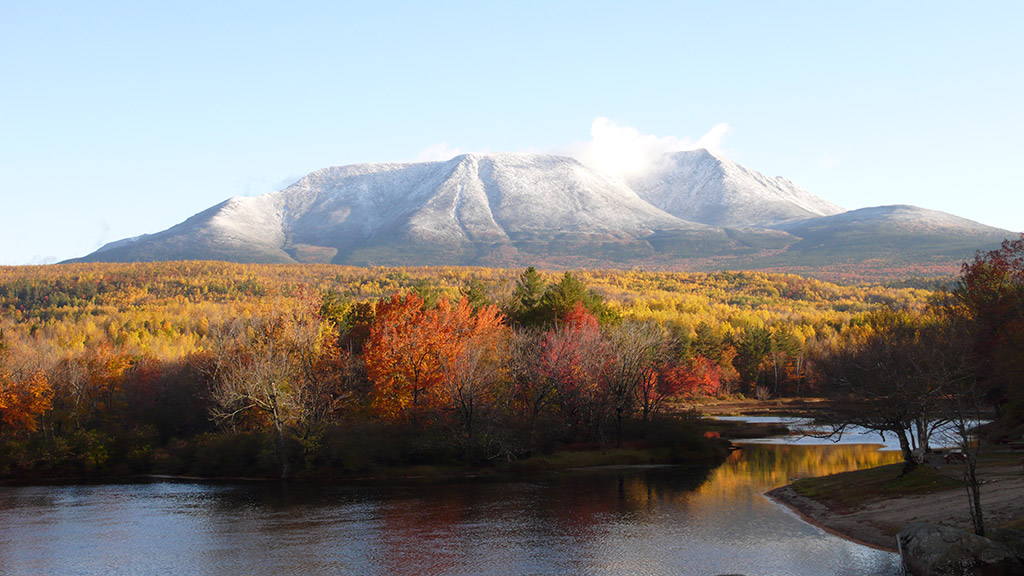 A Week In The Woods  by Nathan Kallan

“Come on Nathan, keep going, only another couple of miles” Alton was hiking right behind me and encouraging me as my morale and speed flagged. I was homesick to the point of tears and missed my family. I wanted nothing more than to go home and relax. If it wasn’t for Alton, I would have given up and had my parents come and get me long ago. He was no doubt feeling the same way I was. We seemed to trade off be the encourager and the encouraged. Today it seemed was my turn to be encouraged. We were five days and 95 miles into the hundred-mile wilderness. We had set off in high spirits, but they had gradually sunk lower and lower as we went. In 2014, my family and I hiked the entire 2185-mile Appalachian Trail, so I knew what it was like to be out in the wilderness completely isolated from civilization. However, when I hiked the AT I had been with my parents. That had been one of my biggest worries about this hike, homesickness, but after going to a sleep-away camp a couple weeks before and hardly thinking about my family, I was confident that it wouldn’t be an issue. Alton and I have been friends since the first day we met at daycare. The day started with us sitting in the sandbox laughing and throwing sand in each other’s eyes when the teachers tried to separate us, we just sobbed and made our way back to the sandbox. That pretty much describes our friendship since. We bicker like an old married couple, but we are as close as two friends can get. I had no worries about Alton being able to do this hike. Alton had come and joined us on our AT hike when we were in prime condition and had kept up with us just fine, so I had no doubts about him being able to do this. The two of us were going to hike the hundred-mile wilderness on our own, and we planned for it to take us ten days.

The hundred-mile wilderness is the last 117 miles of the AT. It is the longest stretch on the whole AT without crossing any paved roads. The only roads you cross are old and often abandoned logging roads. The hundred-mile wilderness started in Monson Maine and ends at Katahdin in Baxter state park. It has a lot of mountains and is one of the prettiest sections on the AT. 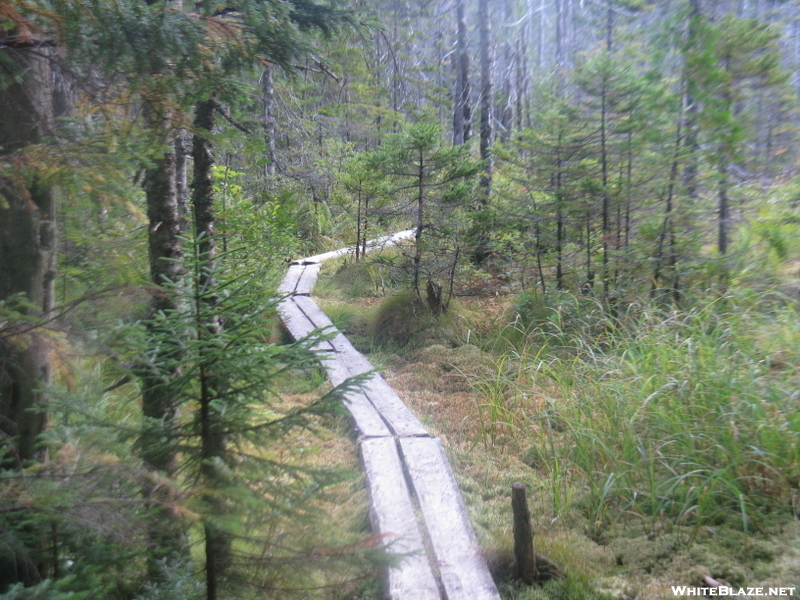 On the way up to the trailhead with Alton, I’m filled with nervous excitement. We are both riding up in Alton’s dad’s car. In the moments before we head out we double and triple check our gear. My dad stands impatiently by the trailhead waiting for us to be ready to go. He plans on hiking in three miles with us to where we will spend the night. As we walk in, the weather is beautiful. The sun is shining, and it is bright and warm. In what feels like a couple minutes we get to Leeman Brook Lean-to. Setting up camp goes without a hitch, and we head to bed. The next morning it is overcast, but Alton and I are in high spirits. Throughout the day, the weather gradually deteriorates, and by noon we are both depressed and bored. It is around two when we arrive at Long Pond Stream Lean-to, where we had planned on spending the night. We feel about as bad as a person can. We stop and have a cup of hot cocoa, and by the time we finish, our moods lift enough for us to go up the mountain to Cloud Pond Lean-to. Four miles later we reach Cloud Pond Lean-to, and we set up camp. We both call our parents and tell them about the first day, in the end, though, we have to hang up to conserve battery life. We say goodnight to them and get ready for bed. Already I am feeling homesick after just a day.

In the morning I feel better; I am proud of the fact that we had done a 16-mile day, the first day out, and figure if we could do it the first day that we can do even more the second. Alton and I get out the maps and seventeen miles ahead there is a shelter that we could stay at. We decided to try and get all the way there. At around ten on the second day, we meet a through hiker in his sixties. He is using his GPS and we are using our maps, funnily enough, our maps end up being more accurate. We don’t get his trail name, so we start calling him “New-fashioned” because he was using newer technology than we were and is fifty years older than us. We are doing similar length days as he. We hike faster, but he gets up much earlier and so we pass him around noon. We find out that his name is Outsourced and he becomes almost our trail father. We end up summiting Whitecap mountain at the same time as he does. He takes our picture, and while he is doing so someone asks “do you want a picture with your grandkids”

“Me? No, I hardly know these kids. They are out here hiking the hundred-mile wilderness on their own”  We had scheduled to meet our parents after six days. Instead, we are going to reach the meeting spot in three. We have a SPOT which every night plots our location using GPS, and our parents can see where we were, so they knew we are running ahead of schedule. The night before we are set to meet them I am in the worst place mood wise, I am more homesick than I have ever been and break down sobbing when I can’t get a hold of my parents. I’m sitting there dejectedly crying, unable to get a hold of my parents. I’m completely wiped both physically and emotionally, but I jog up the trail some to see if I can get service. Eventually, I get a hold of them; I’m so relieved that I start crying even harder.

The whole afternoon, I keep thinking that I hear my dogs or parents approaching, but it is never them. Half a mile from the road we reach the summit of a small mountain, and Outsourced is setting up camp there. I’m so eager to meet my parents that we don’t stop to chat and just push on. We finally get to the road, and I’m disappointed to find that my parents aren’t there yet, but we are still in high spirits. We look around for a good campsite, and when they still haven’t arrived by the time we set up camp I begin to get worried. I take out the map and look at where the road went and see that it is a gated a couple miles up. Every year we go to a campsite called High bridge and it was gated and closed at eight. Thinking that this could be the same thing just earlier; I start to get panicky. I start crying a little.  I am sure that my parents have been locked out and can’t get in. I try to call them, but we are down in a valley and get no service. Then I really start to panic. Alton reassures me and tells me that he doubts they are locked out. I decide to run back up the mountain a mile to where Outsourced is camping and see if I can get service. I call and after ringing a couple times the call goes to voicemail. I ask Outsource if I can use his phone, but it doesn’t work either. I feel desperate, but I want to hold it together in front of outsourced, and I start walking down toward the campsite. Before I’ve gone more than 10 yards, Outsourced calls after me to wait. He gets up and puts on his boots. He and I start down the mountain together and before we go very far, I heard the hoots that my family uses to communicate in the woods. I hoot back, my voice breaking in relief, and I start to run down the trail. I round the next bend and see my mom and run straight to her. I am so relieved and happy that I can’t hold back my tear even in front of Outsourced. My mom invites Outsourced to a breakfast sandwich trail magic in the morning. We go back down and when I get there Alton is in tears as well, we embrace, both so relieved that we had been wrong. He later told me that he had been just as stressed out and worried as I was, but was trying to hold himself together in front of me because he knew that if we both broke down that we wouldn’t do anything about it. My parents spend the night with us and decide that they will drive to the next road cross in about ten miles, and set up trail magic. My sister decides to hike with us to the road crossing. When we get there, they resupply us, and after an hour and a half break, we continue on.

We hike for a few minutes and then hear the dogs run up behind us, and my dad ran up behind them a moment later. This happened multiple times, and after each time it becomes harder and harder not to just go back ourselves. After the last one both Alton and I agree that if it happens again, we will just go back with them. They didn’t show up again. We end up doing almost twenty miles that day, despite the long break in the middle. The next day we top that with a twenty-two-mile day. My parents are planning on hiking the last ten miles with us. My parents park at Abol Bridge, the official end of the hundred-mile wilderness, ten miles before Katahdin, and hike in to meet us. We run into them about four miles from Abol bridge and we hike together.

The section from Abol Bridge to Katahdin is one of the prettiest section on the whole AT. It runs along a stream and there are dozens of amazing places to swim. At one waterfall, Alton and I are sitting on a rock at the base of the falls, when a fish jumps onto the rock in front of us. We are both so surprised that neither of us processes it until after it flops back into the water. The next morning we get up early and hike top of Mt. Katahdin. This is my eighth time hiking the mountain, and I had only ever gotten a view from the top once and that was only for a couple of minutes. When we first get up there it is socked in, but it starting to thin out. After about an hour every cloud is gone from the sky and we have some of the best views I have ever had. We can see for miles and it is some of the prettiest land in Maine. That is a better ending to the hike than any I could have thought of and it is a special sight.

We completed the hundred-mile wilderness in six days when we had planned on it taking us ten. Neither of us was strangers to being away from our parents. We were both independent teenagers. Something about being alone with yourself and maybe one other person and having nothing to do but think all day can make even the most independent person feel homesick. Alton and I experienced some of the worst homesickness either of us had ever felt on that trip and did it in much less time than we thought.